The Fall: Eden & Beyond 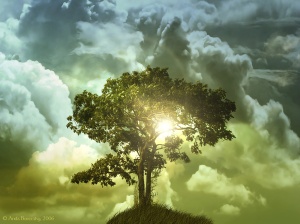 The book of Genesis (2:17) refers not only to the tree of life but also to the ‘tree of the knowledge of good and evil’[1]. It was the fruit from this tree that was prohibited.  It seems to me, therefore, that ‘Good and Evil’ were not new phenomena—arriving in the garden of Eden as a means of exposing the heart of mankind. Rather the linguistic use of the term ‘good and Evil’ defined an actual state or potentiality. In other words ‘good and evil’ had prior linguistic and experiential reality with regards to the actions of other created agents.

R. J. Russell (2008) points out that ‘the Second Law of Thermodynamics provides an example at the level of physics of what is needed if the consequences of sinful acts are to be expressed physically, including dissipation and disruption, as well as the consequences of virtuous acts of beauty and goodness.’ (R. Russell, 258) This potentially had been allowed for prior to the genesis of creation. If the Second Law is the necessary component—the one constant that produces the bountiful array of life that emanates through the biological processes as well as producing the entropic consequences that bring about predation, parasitism, plague and even the possibility of ‘natural disasters’—then its inclusion would have been either an intentional act of the Creator of the universe or otherwise. I advocate the former—something the Apostle Paul seems to imply in Romans 8:20-21 when he states that—‘the creation was subjected to futility, not willingly, but because of him who subjected it, in hope that the creation itself will be set free from its bondage to corruption and obtain the freedom of the glory of the children of God.

For the creation was subjected to frustration, not by its own choice, but by the will of the one who subjected it, in the hope that the creation itself will be liberated from its bondage to decay and brought into the glorious freedom of the children of God (Romans 8:20,21 NIV)

I take it that it was, as the apostle suggests, God who subjected the creation—not: angels, demons or mankind. Leon Morris states that Scripture never assigns—either to ‘Adam’ or ‘Satan’—the power to bring about such far-reaching change, and that there is no reason to think of Adam or of Satan acting in hope for the future. “…hope is characteristic of God, who may indeed be called ‘the God of hope’ (Romans 15:13) The cosmic fall is not the last word; the last word is with [hope].” (L. Morris 1988, 321-322) When, however, would this subjugation of nature have taking place? Well, I suggest, as far as Paul was concerned it would have been after the event in the garden (Genesis chapter 3). Paul, most likely, would not have presumed that God had pre-ordained the present created system in order to deal with sin/evil. However, as one who knew the Hebrew Scriptures, the apostle ought to have realised that neither of the characters in the Garden of Eden had eaten of the tree of life–so that they may live.

Regarding Paul’s reference to Genesis 3 James Dunn (The Theology of Paul the Apostle 2003, 96-97) suggests that the allusion is clear—and that the theme is familiar. Dunn states that the apostle draws the obvious implication from the function of the tree of life in Genesis 2-3, that death was not a part of the original divine intention in creation. However, despite some ambiguity, Dunn offers what he thinks Paul might be saying:

What Paul seems to be saying is something like this:

And the Lord God said, ‘The man has now become like one of us, knowing good and evil. He must not be allowed to reach out his hand and take also from the tree of life and eat, and live for ever.’ So the Lord God banished him from the Garden of Eden to work the ground from which he had been taken. After he drove the man out, he placed on the east side[a] of the Garden of Eden cherubim and a flaming sword flashing back and forth to guard the way to the tree of life. (Genesis 3:22-24)

Genesis 3:22-24 informs us that the man had not eaten of the tree of life: that there were ‘cherubim guarding the way to the tree of life. The occupants of the garden had ‘eaten’ from the tree of the knowledge of good and evil (Genesis 3:6). This was not at all surprising as the quest for knowledge is power (enpowering).  It was in the quest for knowledge where the problem lay—the quest for power and personal sovereignty. God had made provision for the sustaining of life (at least symbolically).The tree of life had not, previously, been out of bounds. Physical death was however the ‘order’; it was the necessary consequence of one of the fundamental laws of physics: the second law of thermodynamics—what William R. Stoeger (2007)  describes as, ‘…the underlying physical reason for the transience and fragility of any physically or chemically based system—any material entity…’ (96). Death was natural yet the possibility of eternal (physical) life seemed to be ‘on offer’. If eternal (physical) existence was possible, why should God have included such a defining set of rules?

There are three reasons that I wish to consider as ‘reasons’ for God’s inclusion of the Second Law within the laws that govern physical reality:

I need to point out here that God’s ‘mission’ is a Cosmological rescue mission and not (simply) an anthropocentric remedy for sin—though it is, absolutely, that as well. This is not to undermine the problem of rebellion and moral degradation within our own species. I, in no way, wish to deny the reality of humanity’s  ‘fallen nature’ but I, most definitely, want to offer a far broader ‘sweep’—one of cosmological significance. 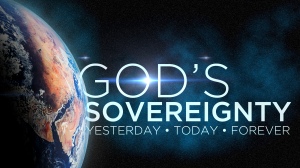 Belief in the sovereignty and integrity of God leads me to the conclusion that God is working his purposes out and that belief in God’s benevolence can be upheld. However, the world ‘has been’, ’is being’ and ‘will be’ subjected to degradation of all kinds by its creator until the eschaton. Scripture tells us (Psalm 24:1-2) that this world and all that is in it belongs to God and yet Scripture also states that, ‘the whole world lies in the power of the evil one.’ (1 John 5:19) and that, ‘…an enemy has brought corruption to the earth…’ (Matthew 13:28).

There is, I maintain, no contradiction here as ‘ownership’ or ‘authorship’ does not preclude either intrusion or the out-workings of the decisions of ‘minds’ other than God’s.  Of course, if God were to have created an oxymoronic state in which creatures existed with ‘the will to do’ and yet were only able to function according to the ‘progam’, it would be, I suggest, a ridiculous state of affairs. If God controlled every single aspect of that ‘free-will’, what would be the point of such a ‘creation’?

Greg Boyd argues that, ‘If the cosmos is not something of a democracy[2], it has to be something of a tyrannical monarchy.’ (1997 118-119) I am, most certainly, not advocating Boyd’s Open-Theological/dualistic views here. However,what is clear from both observation and from Scripture is that the earth is not anything like ‘heaven’ but that it is a place full of all that might be expected if an enemy of God ‘wished to’ usurp God’s authority and to tarnish God’s reputation. Moreover, this ‘enemy’ and his minions, most likely,have been usurping God’s authority from before the beginning of space/time as we, currently, understand it.

This ‘present’ state—as recorded in Scripture and as observed by the discerning eye—is not an example of chaos ruling over sovereignty or any other kind of alleged (dualistic) cosmic conflict. ‘It is not at all what it seems’. It is, in spite of what seems to be ‘evidence’ to the contrary: God working his purposes out in His universe. For the Christian it is, as yet, an unrealised hope—an unrealised eschatology. For God though, as Richard Bauckham (1999) points out, it is a different matter:

“Eschatology talks about God’s future, and this is more than the future time. It is the future of time itself—time past, time present, and time to come. In his future, God comes to his creation and through the power of his righteousness and justice, frees it for his kingdom, and makes it the dwelling place of his glory.”

[1] C. John Collins (Did Adam and Eve really exist? 2011, p.65) refers to the symbolic references ( e.g. Proverbs 3:18;11:30;13:12;15:4) and suggests that the use of such language warrants us in finding the this tree to be some kind ‘sacrament’ that (somehow) sustains or confirms someone in his moral condition—this being the reason for God’s banishment of the couple from ‘the garden’.

[2] Whilst not sharing all of Boyd’s particular views of the openness of God I appreciate his sentiments here—that there has to be activity in the creation that is not under the control of a cosmic puppeteer. This applies to both humans and angels.