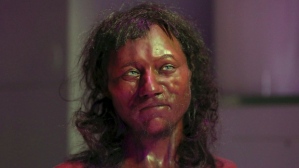 Regarding the ‘emergence of the creatures bearing the image of God, Robinson, Negus and Southgate (2011) rightfully conclude that whatever way the imago Dei is understood, an evolutionary perspective raises the ‘thorny’ questions of how and when (in the process of hominid evolution) the creatures with the ‘image’ and ‘likeness’ of God first appeared. Though there are ideas as to when such an event as this might have occurred the ideas dwell, somewhat, in the realm of speculation—especially when any notion of ‘body-soul’ dualism is brought into the discussion.

Robinson, Negus and Southgate offer a scenario through which an evolutionary process may have brought about a state of affairs that would have (coincidently) allowed for the significant changes that may have been ‘responsible for’ the emergence of ‘the image bearers’ e.g.

Bipedalism occurred before the large increase in brain size that characterise the human lineage. It seems that bipedalism may have led to  changes in the behaviour that made increased cognitive capacity advantageous…It is not that our higher powers of reasoning enabled us to walk, but that our mode of walking enabled us to think. (Robinson)

Of course, it might well have been the case that our ‘mode of walking’ brought about a state of affairs that allowed for the emergence of the creature made in God’s image. The above suggestion might well suit those who are inclined to accept the material—the physicalism that sits well with a materialistic view of man’s evolution—but that is, nevertheless, a rather reductionist view of the imago Dei—‘physical’ but not ‘spiritual’.

My view is that there had been an ‘intervention’ at the appropriate time that allowed for such changes—changes that were physical but that ‘introduced’ the spiritual:

C. John Collins advocates that: “…man is an expression or transcription of the eternal, incorporeal creator in terms of temporal, bodily, creaturely existence”. These features of God, Collins argues, are present in man to distinguish him from the other creatures; and in man newly made, they were fully in accordance with God’s own purity…We can also see that the resemblance view does not exclude the representative or relational views: rather, these features of human nature form the basis for man’s rule and relationships.” (C. J. Collins 2011 P67)

Mankind is an enigma amongst the rest of the created order; he is physical and yet spiritual. From a biblical perspective it has to be the case that the imago Dei expresses more than that which would have ‘naturally’ arrived as the result of [Neo Darwinian] evolutionary processes i.e. that at some point in time God brought about a state of affairs in which there appeared the creatures Scripture describes as Adam & Eve.

These are the generations of the heavens and the earth when they were created, in the day that the LORD God made the earth and the heavens. When no bush of the field was yet in the land and no small plant of the field had yet sprung up—for the LORD God had not caused it to rain on the land, and there was no man to work the ground, and a mist was going up from the land and was watering the whole face of the ground—then the LORD God formed the man of dust from the ground and breathed into his nostrils the breath of life, and the man became a living creature. (Genesis 2:4-7)

Melvin Tinker (2010) points out that Genesis chapter 1:1 to 2:4 make a strong emphasis on God’s activity in creation, “…it is all, ‘God did this’ and ‘God did that’. The word Elohim the all-powerful, majestic God. But when we get to this passage it is ‘the Lord-God’, Yahweh-Elohim. This is God’s personal name… yet this is not only the personal name of God, but the covenant name—the name which reveals God’s character as the One who establishes relationships with people, pledging himself to their wellbeing… Here we see God stooping down, as it were, in the most profound imagery of divine condescension to form (yatsar) man as a potter shapes a delicate priceless vase. But when he breathes into his nostrils the breath of life (nephesh hayyim), with the result that Adam becomes a living being (nephesh hayah). Something God does is not done with any other creatures. This is a picture of the deepest level of intimacy. It’s as if God is imparting something of himself to the man—the divine breath of the spirit (ruach)

It is this ‘imparting of himself to man’ that has produced so much speculation and disagreement. The question therefore is: What were and what are the implications of such an impartation?

Nancey Murphy advanced the view that science has provided a massive amount of evidence suggesting that we need not postulate the existence of an entity such as a soul or mind in order to explain life and consciousness. Murphy’s view, as far as I am aware, hasn’t altered since the 1998 publication of her book on the subject. Murphy’s view fits well with the ‘establishment’ in that it does not conflict with naturalistic views—apart, that is, from any metaphysical conjectures that may be opined. The physicalist view stands in stark contrast to the ‘Substansavist’ view held by the likes of James Orr. Or states that, ”[The divine image is] a mental and moral image. It is to be sought for in the fact that man is a person—a spiritual, self-conscious being; and in the attributes of that personality—his rationality and capacity for moral life, including in the latter knowledge of the moral law, self-determining freedom, and social affections; highest of all, in his capacity for fellowship with God.”  (Orr, 1908)

Michael Heiser (2015) suggest that there is mystery around the subject and, therefore a physicalist view of the identity of imago Dei is speculative and need not be the ‘final word’ on the matter. J.P. Moreland (2014) suggests that Science is helpful in answering what factors in the brain and body generally hinder or cause mental states to obtain—but that science is largely ignorant about the nature of mental states themselves. Charles Sherlock (1996) offers what I consider to be a reasonable conclusion[1]:”Rather than asking,’What is the image of God?’ we are invited to explore the question. ‘What does it mean to be made in the image of God?’ In this way we acknowledge that we live as those who know our status as bearing the divine image.Rather than trying to tie this notion down, perhaps so that we may  control both ourselves and God, the Scriptures call us to a pilgrimage of discovering both God and our own selves. P33

Dear friends, now we are children of God, and what we will be has not yet been made known. But we know that when Christ appears, we shall be like him, for we shall see him as he is. (1 John3:2)

NB.The above passage refers to those who are, we can say, in Christ—for Christ is the ‘actual’ Imago Dei.