‘Justice in The Republic’: Why Christians ought to be in Politics 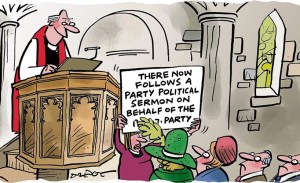 Socrates asks for a definition of justice – asking whether or not it was simply a matter of ‘speaking the truth’ and ‘paying one’s debts’ – whatever they were. However, there was confusion  among the philosophers as they couldn’t see  what the true benefits were. Simonides asked whether true justice was: perhaps, simply a matter of ‘treating fiends well and enemies badly.’[332c-d]  This was disputed by Socrates. The question arose however as to what was meant by those who were considered ‘good and useful’ as compared with those who actually are ‘good and useful’. The answer seemed to be that misjudgements are made as to the notion of the ‘truly  good and useful’:

“Surely people often make mistakes about this, believing many people to be good and useful when they aren’t, and making the opposite mistake about enemies” [334a-e]. Socrates then, for the sake of clarification, asked whether it was  to benefit bad people and to harm good people and that ‘good people’ are JUST and able to ‘do no wrong’. When Polemarchus was asked for his definition of the word friend he came up with the idea of a friend being someone who was ‘useful’  then the definition was altered slightly so that: “Someone who is believed to be both useful and is useful is a friend; someone who is believed to be useful and isn’t , is believed to be a friend but isn’t. And the same for the enemy.”

This is, of course, an incredibly pragmatic [utilitarian] view of friendship so can hardly be categorised under any notion of morality or duty to others – at least we professing followers of Christ ( i.e. in the ‘Post Christian West’) understand it. The point is that the definition puts useful people in the friendship category and the ‘unhelpful’ or ‘useless; in the opposite category. Socrates, however, questions the notion asking for ‘clarification’: “Is it, then, the role of a just man to harm anyone?” [335b]The answer was along the same lines as the definition: “Certainly, he must harm those who are both bad and enemies.” [ibid]. This surely would have been a recipe for social anarchy rather than social cohesion – the question of ‘justice’ though being the final arbiter. Socrates asked whether the function of a ‘just person’ was to harm a friend or anyone else. Polemarchus seemed to accept the logic. It does seem, however, from the dialogue that merely giving an example [through virtuous living] would make no difference to the behaviour of an unjust person. This de facto a quite a logical conclusion.

Christians [in the main] would like to believe that, through living an exemplary/altruistic lifestyle  non-Christians would, somehow, ‘get the message’ and follow suit. Although the idea seems commendable, it does not, in most cases, follow that others follow the Christian example and change their lifestyles. It is only when Christ changes lives that they are ‘changed’. However, should the country be affected to the extent that some Western countries have been affected (some may choose a different adjective, e.g. ‘infected’) by the influence of Christians and their ‘book’ then changes to a nation’s moral code can—and do occur?

Moving on from the aforementioned notion of friendship and justice there now enters into the scene a philosopher named Thrasymachus. Socrates does his best, through what appears to be somewhat insincere rhetoric, to win the argument. Thrasymachus has accused the philosophers of compromise and inconsistencies and is slightly riled. Thrasymachus is apparently looking to glean wisdom from the philosopher rather than listen to what he considers trite banter. When asked by Socrates what he expects from them Thrasymachus answers clearly enough that he is desirous of hearing a decent argument [337a]; Indeed, seeking a true definition of justice is all that Thrasymachus  hopes for – or, perhaps, a description that fits his ideas – ideas that he is in agreement with.Glaucon [Plato’s ‘brother’ – playing devil’s advocate] suggests that it is Thrasymachus who has the ‘smart’ answers and is simply looking to gain praise for his own conclusions on the matter rather than relying on the master [Plato’s mentor] – no matter how convoluted the answers seem to be. In spite of this though Thrasymachus vents his spleen by saying that Socrates ‘disgusts’ him – it seems to him that he [Socrates] gains pleasure by demolishing other arguments by clever logic.

Socrates asks the following question :“Don’t you know that some cities are ruled by ‘a’ tyranny, some by a democracy, and some by an aristocracy?” [338d] Thrasymachus answers in the affirmative. Thrasymachus seems to know what Socrates is suggesting. ‘Morals is mores’ – it seems; and ‘might is right’, whoever has control! This is what justice is – de facto. [ NB. He’s not saying that this is ‘right’ but that it is the way things are]. Socrates concludes that each kind of rule [ruler] make laws according to their own definition of justice.  Thrasymachus agrees that rulers produce all sorts of laws and that they are liable to make bad laws as well as good laws [depending on one’s perspective]. Socrates asks another ‘leading’ question: “And a law is correct if it prescribes what is to the rulers’ own advantage and incorrect if it prescribes what is to their disadvantage?” [339c] Thrasymachus answers in the affirmative but seems somewhat unsure of where exactly Socrates is going with ‘this’. Socrates then poses another question: [1]

“And whatever laws they make must be obeyed by their subjects, and this is justice?” [339c] Thrasymachus agrees.  The conclusion seems to be that: whatever the rulers decide, in the main, is for the benefit of all in the citadel. Thrasymachus [or at least the way Plato represents his views]  is like a lamb among lions.

From this logic one can presume that Socrates et al are suggesting that what is good for the gander is also good for the goose – that the craftsman’s [ruler] duty is to provide for the common good – including their own.

This quasi-altruistic view of things [justice even] is challenged by Thrasymachus who ‘strongly’ objects to the idea.  Thrasymachus says [ibid] that their belief in (what seems to be the innate goodness of ‘the ruler’ the philosopher) is far away from reality. For Thrasymachus ,the very idea that ‘rulers’ should offer up themselves for the benefit of others is a nonsense. It’s not that Thrasymachus doesn’t, according to his view of ‘right’ and ‘wrong’, know the difference between good and bad – right and wrong but that his view is based on empiricism rather than fanciful notions of quasi altruism. “A person of great power”, he says, “outdoes everyone else.” [334a] What he is saying is that everyone is out for themselves and that others who may reproach injustice [2] do so, not because of any feeling of ‘justice’ (right or wrong as we Christians understand it) but because they are afraid of suffering from injustice themselves. For Socrates et al the big issue is the value of justice over injustice, i.e. that justice is more ‘profitable’ than injustice [344e]. For these men it is a question of ‘ideals’ – of what is actually better than what might really be the normal consequence of human behaviour.  Socrates is not convinced by anything Thrasymachus says because ‘he’ believes that there is some ‘ordered’  notion of justice which would work [3]in the ideal society [in the republic]. For Socrates each craft benefits  the other so that even rulers (craftsmen like all other members of the community) do not ‘lord it over’ or dominate or abuse the office they have. They simply serve the common cause.“Then, it is clear now, Thrasymachus, that no craft or rule provides for its own advantage, but, as we’ve been saying for some time, it provides and orders for its subject and aims at its advantage, that of the weaker, not of the stronger….one willingly chooses to rule and to take other people’s troubles in hand and straighten them out, but each ask for his wages..” [346d-347a].

What Socrates seems to be saying is that ‘good’[4] people won’t be willing to rule for either money (as long as they get their wages) or honour –their desire being to serve the Polis; this seems to confuse – even Glaucon. Socrates, however, has not quite finished. He now introduces the question of punishment [ibid] for the good man who refuses to take on the role of ‘leader-craftsman’. The punishment being that if the good man doesn’t rule then someone else will – this person might not quite ‘get the picture’ and follow the logic of mutuality in the republic.  For Socrates there is this idea that there are men who are ‘good’ and that these men will bring in the Republic’s benefits. ‘This person by nature (in the case of the Christian ‘the New Nature) does not seek his own advantage but that of his subjects’. Socrates, therefore cannot agree with Thrasymachus because he (Thrasymachus)  is saying that the life of an unjust person is better [happier] than the life of a just person. Glaucon agrees with Socrates [ aka Plato] that the just person’s life is better—for society,the individual and, I add ‘the soul of man’.

Thrasymachus is clearly not moving from his position for he is looking at the reality rather than the niceties of Socrates’  [include the others if you will] ideas. Contrary to Socrates claim that he views ‘injustice as vice’  Thrasymachus sees it as ‘high minded simplicity’; furthermore he sees injustice as good judgement. Socrates continues to ‘hypothetically’ lambaste Thrasymachus into submission.

“I’ll ask what I asked before, so that ‘we’ may proceed with our argument about justice and injustice in an orderly fashion, for surely it was claimed that injustice is stronger and more powerful than justice. But, now, if justice is indeed wisdom and virtue [a notion that Socrates introduced into the debate – 348a-c], it will easily be shown to be stronger than injustice, since injustice is ignorance (no one could have been ignorant of that).” [351a][5].

[1] Asking questions being the best form of carrying out apologetics – of destroying another’s argument.

[2] Now we’re getting a clearer picture of what justice ‘may’ mean.

[4] The Greek word for good [agathos] implies ‘good at doing something’ rather than any sense of ‘moral goodness. God therefore may be considered ‘good’ in that He does a good job in creation.

[5] One could be forgiven for wondering what, for Socrates, is of the greatest importance: winning an argument or influencing other ‘philosophers’ with a sounder truth.